MAY 10th
We are proud to say that we've been featured in the Spring issue of 2018 of Harrowsmith Magazine!

A short trip from the big city, nowhere near ordinary," neatly sums up this B&B in Northern Ontario known for its middle eastern hospitality. After a slog on the nearby Bruce Trail restores your weary body with a King size bed, 600-thread counts Egyptian cotton sheets and Turkish cotton towels.

In the morning, your most difficult decision will be whether to order the date and pecan grilled sandwich or the infamous avocado scramble egg plate. The Orange Bicycle is owned by Nick Ferrence and Neda Sarbakhsh. Neda, who is originally from Tehran, Iran, had to sell her bicycle when she was 15. Girls were banned from riding bicycles after the Islamic Revolution in Iran.

When she immigrated to Canada in 1998, Neda purchased a second-hand bicycle in Kensington market and landed a job as a bike courier in downtown Toronto. This old Huffy bike and remains in the garden as testament to her journey and continued commitment to exploring and adventure."

Jules Torti's resume reads more like a well-folded treasure map. She has been a canoe outtripper, outdoor educator, colouring book illustrator and freelancer. Jules has volunteered (and eaten all sorts of questionable things) in the soupy jungles of Costa Rica, Uganda and the Congo. Her work has been published in The Harrowsmith Almanac, The Vancouver Sun, The Globe & Mail, travelife, Canadian Running and Coast Mountain Culture.

She actively feeds her blog, Alphabet Soup, with posts on books, birds, burgers and beer (in no particular order) across the latitudes from Zanzibar to Iceland. Closer to home, she was grandfathered into the Galt Horticultural Society, was the caretaker of a 155-year-old stone heritage cottage and has chronic fantasies about church conversions, beekeeping and owning llamas.

She has been known to slam on the brakes for photo ops of saltbox houses, saddle roof barns, snowy owls and sunflower fields. As editor-in-chief of Harrowsmith she is thrilled to be able to curate, write and read about the very best things in life.
Image may be subject to copyright
Posted in CanadaTagged Annapolis Royal, B&B, Bailey House, bed and breakfast, Bed and Breakfasts, Earle of Leinster "Inn Style" B+B, Eastern Canada, La Rose des Vents, Magdalen Islands, Mount Tryon, St. John, The Orange Bicycle Guesthouse and Gardens, Tobermory, Treetop HavenPosted on March 5, 2018
Image may be subject to copyright 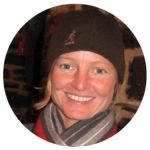